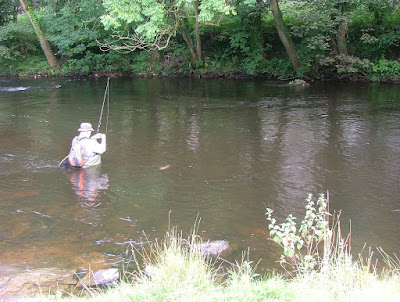 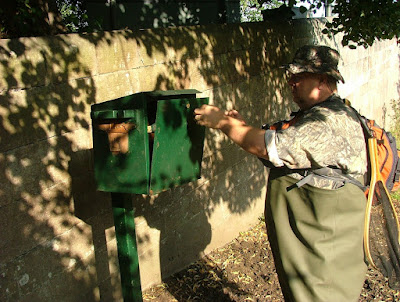 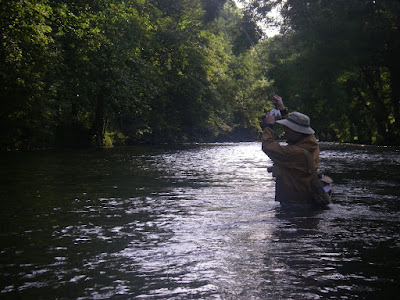 Had a nice invite off the most productive big fish puller Trugg! It did not take me long jump at the chance to fish one of the great Derby County stretches, with a top angler like Mick..

I get on very well with Mick as he is a down to earth bloke who trys not to be one of the elitist pri"ks i so often come across..He is a 'proper' fisherman who catches lots of fish and would rather see me catch fish than himself!!

I arrived around six oclock to meet Mick who had been fishing for a few hours who had taken a few nice fish on the daddies, this place was something like had never fished, your own car park and a green box that was like a small tardis with lots of info inside, reports of fish caught, who had been on, flys that have caught, the list was endless, mick had his own key which was hung up in the box to show we were fishing and signed me in.

The place looked very special, great surroundings and a magnificent castle on your backcast, far from back in stoke with pot banks!

The river is very wide and it has that look about it that sends your heart thumping, 'i bet there's some right Fu"king clunkers in here Mick?' Mick told me to keep the language down as we were on a private estate, he was right, i needed to behave at the top venue, i was just exited!!

We got in the river by a huge bridge, Mick told me the wading was quite dodgy but i went thundering in only for me have to grab hold of mick to stop me going in!! Now i know why Mick is so big! its to keep him down in these big flows!!

Mick stud with me and just stayed on my shoulder pointing out the hot spots, a big wide ripple with lots of overhanging trees, it looked right buzzing...

3rd cast under a over hanging tree and a huge brown came out from the tea coloured river and smashed my fly, these fish go mental when you hit them!! i landed a top draw 2lb brownie,

Mick had told me to bring a heavier rod than my 3# 7ft, i wish i had because i was not getting the line control i needed and the fish were putting my rod past its playing loop, still great fun but i started to use micks sage which took me another two fish pushing the 2lb mark, this was great and what i have been after..

Every time the fishing went quite Mick would pick the rod up and take a fish within 5 mins, some blokes just have it and i watch him like a hawk get tips from him as these are the fly men you learn from.

We had a hour where the fishing went quite and we just carried on fishing having a good laugh as we always do, i am quite a good wader now and just get in there now but the big boulders in the river can cause you to fall over, i had mick stopping me floating down quite a few times!

The light turned and there was a huge emerge of sedge, i have never seen so many sedge coming up to the surface and taking off, the fish new it was supper and started to hit them big time, a hatch like i have never seen on my rivers, i could imagine this stretch producing a huge spinner fall due to the nature of the flow..

I got on this hatch and took a nice grayling, only my second of the season!

We fished well into dusk and wading back i we were holding hands to get back to the bank in safety, well we must of looked a right pair but a wise thing to do, I must admit if anyone was to see us they would have thought Mick was the 'taker' !!!!!

We got back to the green box with lights inside!! signed out and shook hands and i thanked mick for a great night and made our way home..

On the way home i decided that i will join this club next year, the river hear is only 25 mins from my house, the other rivers also near me, Mayfield being the closest..The club looks to be very well run and Mick says its the best run in the country..

Thanks for a top night mate and you got me a clunker, can you get me one like you had on the wye?