Grayling on the Wye with John Tyzack 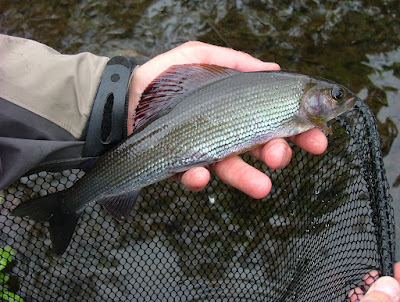 I had booked in another session with the Stockport Guide John Tyzack for a session on the great Wye which i have become a member.
I had previously fished with him on my favourite Ellastone stretch of the Dove and he totally blasted the river showing me dry fly fishing at the top level..
I have not done any serious Grayling fishing and only fished the dry all season so was looking to see if this Grayling fishing folk love was to strike a chord for me?
I arrived around 10.30 to meet JT on the private car park at the pumping station, i arrived on my Honda CBR 900 fireblade which gets me there quite quickly from my house!! John had a laugh and we chatted about our plan for the day, he said we have three options?
1. fish siting and stalking
2. Small Grayling shoals with lots of fish
3. Chech nymphing deep fast runs for big Grayling

What did i choose? all three of them please John!!!?
We set of and made our way up the river...As John was my guest for the day i wanted him to fish himself as this proved great for me last time as i learnt more by watching him.. I asked John how we would keep the Trout out the way and he said that this is a method that needs to be taught, I wondered how this was possible?
John started to spot the Grayling and showed me the signs to look for, low in the river, forked black tail, dark black looking from above, slow movements ect, i started to get the gist and started to pick out the dark shapes ghosting around the bottom..
We selected a pattern and john dropped his nymph 2ft above the fish, dead drifted it, the Graylings fins fluttered and swam left and sipped the nymph in, rod lifted and a decent scrap ended with a nice pounder in the net.. A bit of a piss take really as it was his first cast.. 'Now its your turn' with JT on my shoulder.... Three casts later i repeated the lesson and hooked and landed a 1lb on a halfer!! Watching the fish take the nymph was great, it reminded me of rolling down a luncheon meat cube to a sighted barbel on the Dove, any movement other than a dead drift was a failed take....
The major problem was not to hook a trout, if a trout was in the zone we would move away, John showed me a technique to get the fly low down under any feeding trout and hit the Grayling we had seen, this was a great challenge and we started to sight fish and take most.. One occasion i had a trout dart in and take the nymph, john told me to leave it there and do nothing, to my amazement the fish mouthed the nymph and then spat it out and moved on!!
The river was very low indeed and stealth was needed in most situations..
Around dinner we moved to a nice dry fly run which we could see the telling sign of the bubble left from rises, Grayling on the dry!! A dry fly was selected and JT took a couple in this run...
We had a very good fish rising around a tree which was impossible to reach with with the dry, JT did the most insane cast i have ever seen, he cast his fly well up the river and let his fly line wrap itself around the tree causing to fly to land right around the corner into the feeding lane of the fish!!! The fish came up and sipped the fly down.... JT hooked it and it came off, the first time i ever saw him loose a fish ever...i could see the competition in him as he was right pissed off.....
The picture below shows the tree to his left where he did the cast!!! Top draw! 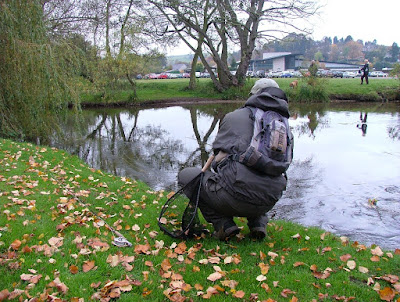 We then drove to various runs know to John where he showed me the cheq nymphing style, a deadly method which took us bags of Grayling, We were hitting shoals of them and then moving on to another..
This method is obviously harder with the no wading rule but JT showed me methods that worked no end, i struggled at times with this being new to me but something i will get from practise, i would be thrashing a swim with no fish and JT would come in and take my rod and have fish on the first cast!! presentation just like the dry.....
We carried the afternoon taking fish to whatever the conditions needed, sighting, Dry fly fishing and Cech nymphing.. great sport..
Fishing for the Grayling is something quite new to me and i can now understand why so many people rave about it, the way a Grayling feeds in the river, its calm movements and its top looks.. I will be enjoying my sessions there this winter and have some real clunker spots up my sleeve!!
Nice one for another top day out John, i have still got ur manc accent in my head saying 'strike kid!'
Still 'Living the Dream'
Nice one
Glen
Posted by glen pointon at Thursday, October 22, 2009 4 comments:

Last day of the Season and all my dreams come true!! River Wye Derbyshire 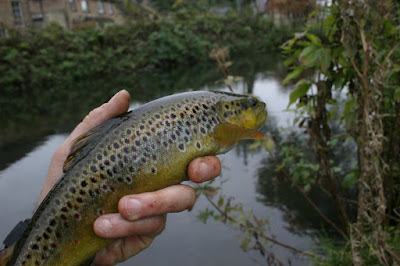 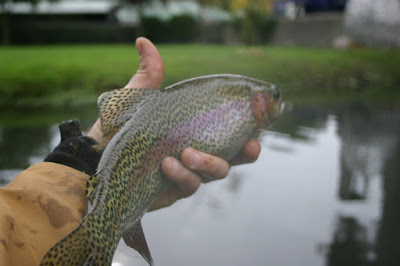 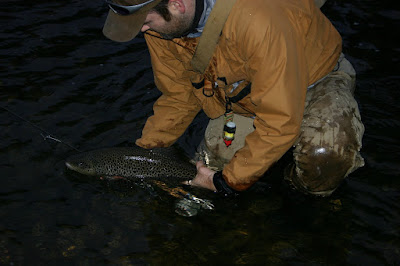 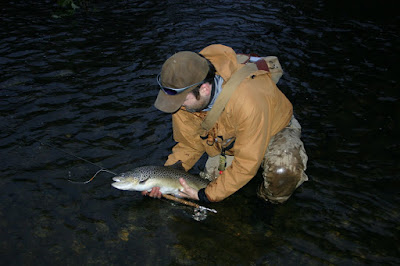 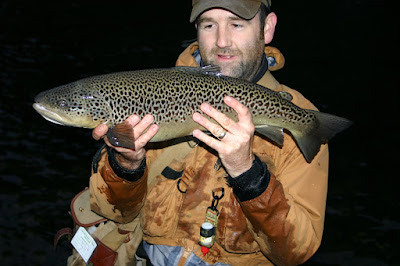 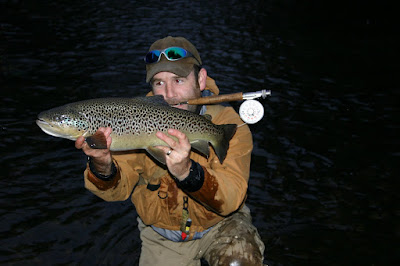 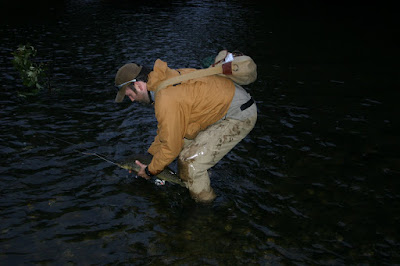 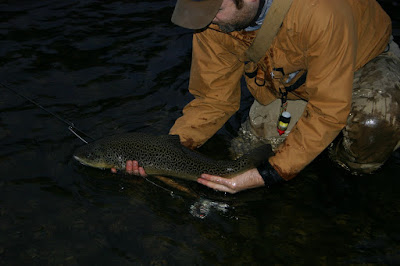 Well i have joined the Peacock Fly Fishers for the grayling fishing through the winter period, Jenny the Manager at the Peacock had let me fish for the trout as much as liked in the last five days of the season due to late joining...
I went to work today and took my tackle ready to get off early on the last day of the trout season, i had no flys left in my box so took my tying gear and tyed some olives up in the van with the clamp attached to my steering wheel, I knocked up some LTD sedges and some JT olives..
I rang the excellent river keep jan to find out what the river was like after the much needed rain, he gave me the good new that the fish were 'on it'...
I arrived around 3.00 and decided to fish the top end of the stretch into Scotts Garden, I met the river to see a handful of fish rising just under the surface to emergers, i selected a skinny size 20 olive i had tied and after 4 casts i was into a angry Rainbow, these fight so hard its untrue, around 2 pound and you have got your hands full, my drag singing on 20 yard runs...After a good two minute scrap i landed the best looking rainbow yet..
I turned around to see Jan who as always with a smile on his face, he inspected my fly and we took a stroll around the river pointing out good spots, i like the company of Jan, he is layed back and always there to help out..
Jan got off and i made my way around different runs taking fish to a size 20 olive, some of the fish are very hard to get a take, they will rise constantly and totally ignore your fly if something is not quite right, i also find that your first cast is the most important to a rising fish, get it right and your chances are high, if you get drag ect you might as well move on or change to another fly...
I took a stroll down to the cricket club section, this is where the big gun are and i always like a go at them, i just cant believe that these huge fish will rise to spinners and sedges ect, the big fish don't seem to rise in any order, they just show every now and again..
I saw a huge brown come clean out the water, i selected the LTD and the first cast produced a enormous dive at the fly, quite mad considering the size of the fish, i struck down hard and low and felt that amazing feeling of the rod loading up as the hook sets, the fish did the usual brown with a massive boil and a strong run for the nearest snag, i had my 2lb tippet on and knew i was in for some heart stopping moments, the fish was hugging low and deep and was basically doing
what it wanted!! I eventually got the fish to move towards me and it plodded around just in front of me, the line went around a rock and i thought that was it so opted to jump in the river and land it to hand, luckily the line came free and the fish was holding current 5 yards in front of me, the fish rolled and that when i realised how big she was, the last time i saw anything near this was Mick Martins brown earlier in the year, i came behind the fish and cradled her with both arms like a big carp, she was so calm and i had never really given the fish any stick. I got some bystanders to take a picture of me and unhooked her and held her in the the river for five minutes... i held her upstream for longer than normal as the fish would of been tired.. i held her and admired the condition and sheer size of the fish, i let go and she just sat by me for a few minutes and just drifted off as though nothing had happened..Come on!! i shouted...
I sat down on the grass, and got the Kelly out, i had no water so filled it up with the Wye water, i did not care, i had caught the fish of a lifetime and also tasted the pigeon shit marque shit water last time i was here with the lads!! I lit a fag, supped my Wye tea, lay back and had thought 'Fu"k me, i am living the dream'!!! 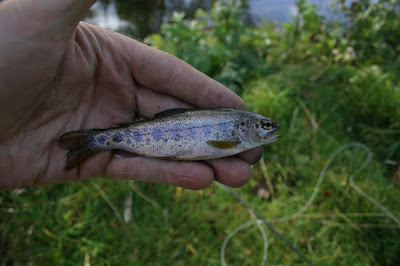 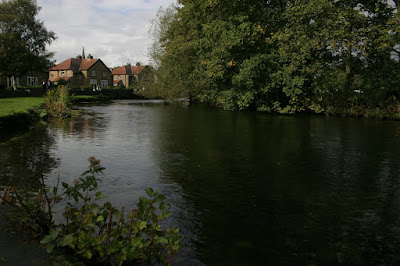 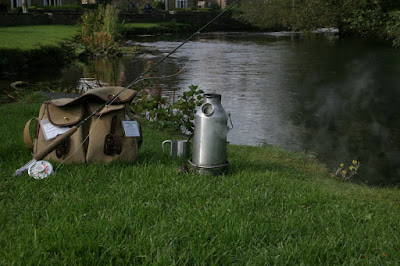 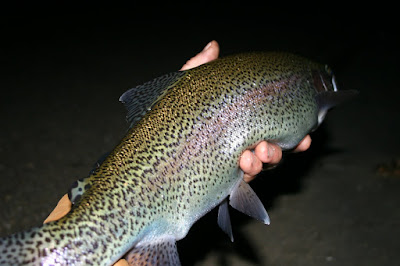