Andy Warem is doing day tickets for the stretch, and he lives on the bank and will show you the river, it a testing river but the trout are huge and rise to the olive, plenty of grayling that take the dry too but a nymph is a killer. stealth is the key...its catch and release only...
If you want a session ring Andy on
07989323051

Wessers Wye Wacker puts a smile on our faces

Has my usual session on the Wye Sunday and guested my mucker Wess for his first session on the dry at this holy river, i met him at the Peacock at 9.00am and we sat down for my now regular coffee in the lounge..

Just seeing Wess's face was a picture as i knew how he would be buzzing as i was on my first visit, even i am still the same every time i come to this place..
Jenny Mcenzie brought us the flys that are sold at the Peacock and we had a chat about how are day would go, there is nothing like the antispation of getting yourself ready for the days fishing as his place can make dreams come true. I told Wess of the mistakes that people make who come to this river which i have done myself, You pay your money and go mad fishing everywhere trying to cram it in in one day,  by doing this you end up missing hatches all over the place and can go home with a smacked arse..my method is to choose a section and get to know it and wait for it to happen...because it always does..
I choose to work the beat above midway, somewhere i know quite well and this would give me chance to help Wess all i could.
We drove along the A6 following eachother with our arms hanging out the windows inpersonating being into a big fish!! Peolpe walking past must have thought we were mad!!
We soon tackled up next to the river with some pure piss take from our dress sence, Wess thinks he looks cool with his chav cap and his mchammer type waders!! when i look pure class on the street! with my barbour gear!!
I wanted to start by showing wess some nice runs and did not want to fish until he had taken a fish, i sometimes feel a bit under pressure when showing a section i fish incase it does not happen and i would get some severe stick if we drew a blank..
But it was not 5 mins and Wess hit a fish on a elk hair caddis, a small fingerling rainbow but a true wild one and Wess was buzzing!! He started to get the feel and started to take fish so i got my rod out we went wondering around and sighting fish..
We saw a big rainbow in the gin clear water and it was my turn for a go so i just flicked a JT olive into the path of this fish with not much confidence, but like in slow motion it slowly moving into it path and sipped the fly in, i waited then bang set the hook home and she was off downstream zingging my lamson, after a right good scrap wess netted my a nice 1lb 8z rainbow..
It was now Wess turn and he did exactly the same but this time a nice brown came to hand and was realeased..sight fishing is superb, wess was on a high he was shocked to see what was going on, i too could not beleive that these fish were 'on it' and a fly put past in the right manner would be taken..
We spotted another good rainbow and Wess flicked his sedge out only to see the rainbow smash it like i have never seen, a few scary minuites and i put the net under a wild cock rainbow that was perfect in every way tipping the scales to 2lb 2oz...
The first three hours gave us tremendous sport but there after we were punished and the river switched off in the afternoon, we got to the stage where we were flogging the river slightly and it was very hard going wth fish showing no interest at all, so we opted to chill out in the town and have some tea..
Nothing got going later on so wess got off buzzing his head off and i went the Peacock for my posh pt of coffee
Sweet
Glen

Wye oh Wye its good to back!! 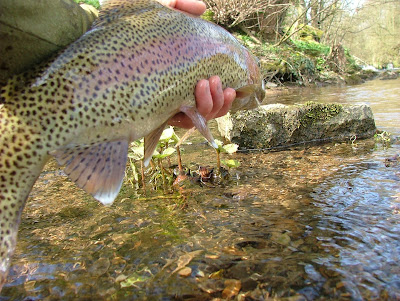 I have not been blogging lately due to having no internet due to moving house and it feels like I have had my arm off.
I am still not sorted yet so I am writing this on my blackberry mobile.
I have had some great session in the last few weeks with some great pictures all ready to be uploaded so keep a look out.
I fished my first proper session on my Peacock fly fishers licence today and it turned out to be another special one.. 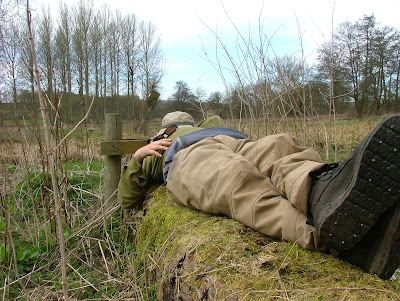 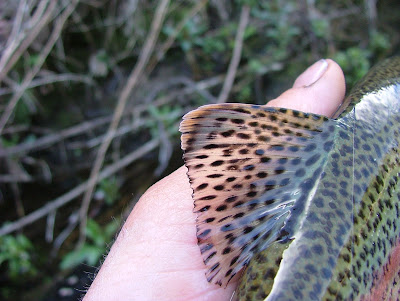 I turned up at the Peacock around half nine and sat down for a right posh coffee to sort me out for the days fishing, the service in this hotel is something else, far away from in Stoke where you get 'what's want duck?' Well I suppose you pay triple for the coffee as you would back home..I was quite embarrassed when the waitress approached me and said 'good morning sir, hope your well and would you like me to pour your coffee!!'
I had to have a quick look around to see if it was me she was talking to! I think they are super pro in this hotel but this talk is not for me and I turned to the waitress and said 'its orate duck you don't have to talk to me with that shit!' She just looked at me with a smile and left me to it..she must have heard that 'lord rocher' was on the Wye!
Well the fishing, I met up with river keeper Jan and we spent a few hours running around the river showing me parts of the river that I could only say opened my eyes big time..
Jan is a good lad as I have said before and is always there to help you out with anything, he takes no shit and is strict with all the rules that I respect, I even managed to wangle some eggs from his chickens that were superb!! 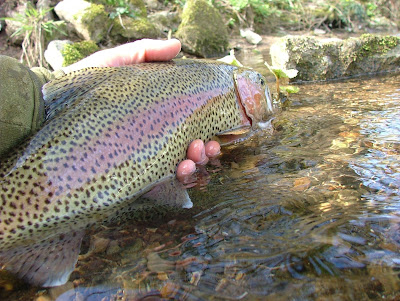 Jan got off and I set up my first dry set up of the season, a 12ft tapoured leader down to a stroft 2lb 2oz 10inch tippet..(Sorry JT still not got to grips with 4x ect)
The river was looking sweet, gin clear with just the right amount of flow, I started to cast a line to get a feel and could not believe how shite my casting had got due to bugging for months...I soon got something like so headed off in search of fish, it was not lond before I found trout moving around on the feed taking nymphs, well as dry fly only I knew it might be hard...I spotted a huge rainbow only 8ft from the bank just holding current in a scum lane...I crept on my hands and knees very close to the fish and watched it for 5 mins, it was moving only 3 inches either way taking nymphs, I had seen sparse hatches of sedge so I opted for my size 17 ltd sedge...I used a method that Jt taught me with the dry last year and believe me no other method would of taken this fish..I put the fly 10ft infront of the fish and watched it sail down perfect, now I was no confident this fish would rise but she twitched her fins when the fly was 5ft away and my heart started to pump,(we anglers know that feeling, it might be a float twiching or a single beep on your delkim) you know what coming next... The fish very slowly pointed itself towards the surface at a angle and its mouth came 2inches out of the water and slurped it in!! I waited 1 second and hit... Fook me! This fish went nuts and zzzzzzzzzz. Zzzzzzzzz zzzzzz zZzZzzzz... Line just kept going!! I eventually landed the fish that was a tap under 4lb in superb condition...what a start to the dry fly for me.. Some people ask why I have joined the peacock and that is the reason, where in the country do you get wild fish of that power that push your fishing to the limits..
I carried on the day searching out fish and most were willing to take the dry...the hatches were sparse and nothing really got going on a hatch but all were willing to take a well presented fly..
I had a lot of fish today and don't want to gloat on numbers as my plan this year is to search out quality fish..
I did have another fantastic fish but that's another tail for another day...
Keeping it real and Living the Dream on my Wye!!
Will post pictures when online..
Nice one
Glen
Sent using BlackBerry® from Orange 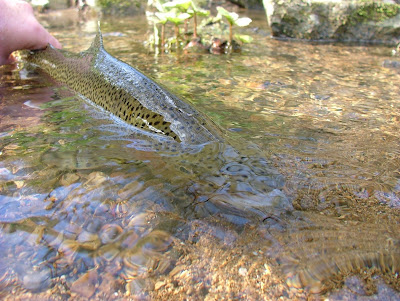