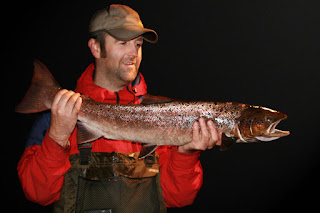 Well here is my story of catching my first ever salmon.

I am not a Salmon fisherman and have never tried it but enquired around Scotland this year but never got chance to go but as things turned out i did not need to bother.
I was Grayling fishing last saturday and whilst wading through a deep run i saw a salmon come clean out the water, this fish was around three ft away from me and scared the **** out of me, i was shocked to see how big this fish was, it was around three foot long and had a red glow down the bottom of its body. It seemed unreal to see a fish so big in a small river like the dove but it made me realise that these fish are coming back to the dove around a very good size.
The next day on sunday i went back to have another go at the grayling and hoping to see these salmon again, I took a friend with me who wanted to watch me fish,
As the light started to go i flicked my nymph unpstream where i had seen the fish and when i started to retrieve the bug i saw a huge salmon come out the water again, i thought wow what a nice fish when my friend shouted from the bank 'its took your fly',
I lifted into the fish and felt my rod tighten into the fish, i was using a 8ft 4 weight greys streamflex rod with 5 lb line and i knew i was in for some fun!!
The fish went absolutly nuts when it felt the hook set home and just run downstream, it went through a stong rapid a i could not stop it doing anything, its took me straight onto the backing so it was at least 40 yards down stream and still running,
I knew the only way i would get this fish was to tire it out so i went running down the river to my friends amusement!! I cover at least 60 yards running down the river with the fish still going when my line got caught around the reel, everything went tight and i thought it was going snap but it turned from the pressure and came leaping out of the river making my heart jump, the sheer size of this fish had me shaking like a leaf, my friend was shouting 'dont lose this fish you ****'
I was into a fish of a lifetime and eventually got it to start turning under full pressure, my rod was just doubled over all of the time,
When the fish saw me it made four more big runs but it was starting to tire,
After half a hour i had the fish in full view and she was lumping around like big fish do, so
I had a small trout net on my back and there was no way it would fit in there so i when i got it close to me i threw me rod down and grabbed it with both hands!
I took it onto the bank and me and my friend micky were jumping up and down like we had won the lottery! well to me it felt better than that!!
The fish was a female Hen and was quite dark. the fish measured 34 iches long with a massive tail, i got the scales from my van and it weighed 9lb 14 oz
In fact it was the lenght of my foot to my waist.
When i got home i told the mrs i had had the best night of my life and she said 'better than your first night of sex with me' and i said 'no not that good babe' but i am a great liar and if you are a fisherman you know what i mean!!
Posted by glen pointon at Thursday, October 30, 2008 4 comments: