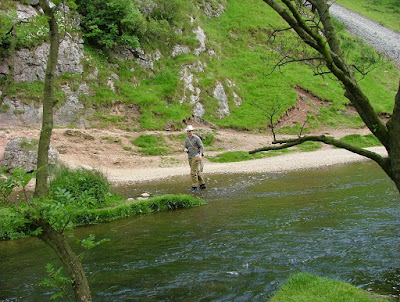 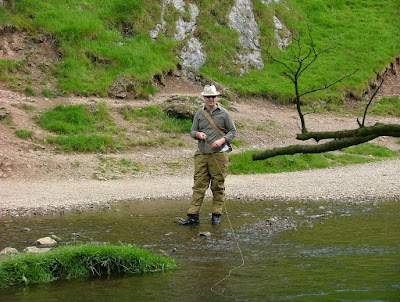 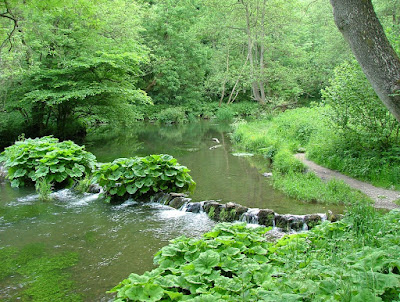 Went to Dovedale tonight, arrived aroung five, met up with Alex Swann for the first time and we decided to fish together for the night, two Stoke lads in Dovedale would usually be poachers!! Even though Alex lives in the posher part he is still a Stokie!
I dropped in in the first pool above the bridge and saw some Fat kid just wading through the river right past me, i can handle this because these fish are so used to it, it proved that when i hooked a nice wild fish 1 minuite after he had waded through! Alex joined me then and we briskly cast to spots on the way up, fish were not rising, as we stood together fishing a pool a Asian lad walked straight inbetween us and walked into the river, Alex was furious and i had a few words, to be honest i dont think they realised what they were doing because they appolagised.
Half way up from the Bridge we had two pro photgraphers taking pictures of us which created a stir, and the crowds were watching us like we were film stars! Alex looked the part in his Paul Smith Hat and i looked a right twat in my Aussie style hat!!
We caught a few upto the Stones and then walked right into the middle streches where Alex showed me the quality runs, Alex is so layed back he is nearly horizontal, we hardly fished and spent the night chatting which was nice from my usual hard fishing approach, it made me appreciate the quality surroundings. Fishing was poor really and rises were far and few all night, i think the May fly is over.
We met up with Adam off the forum who had taken lots of fish earlier and was proper enjoying himself, he had taken his first 2lber and was buzzing.
Alex and walked upstream and only cast to bits of rises but was very hard going, even though fishing was hard Alex is a joy to spend time with and his cool chilled out attitude is refreshing. We made our way back down to the stones and met up with Adam who also had found it harder fishing, We all sat by the stones for ten and then fished casualy down to the car park, I have hooked a very large fish in a certain spot and she only comes out to play at last light, I saw it rising again and we could not get it to take anything, Alex come into play as i sat back and took the piss saying he had got to prove his skill here!! Alex started to look what it was taking and matched the hatch, he tied his fly on and after a few casts the huge fish came and took the fly but Alex did not connect, gutted! The boil the fish left was huge, again this fish has decevied me, Nice to see Alex show what a good angler he is by matching what this fish was taking, you only get one chance at a big fish like this and it then was put down.
Adam hooked into a fish further down but the hook pulled and i took a small brown in the fast run..
A really realaxed evening a great to meet Alex, a happy go lucky chap and a quality angler..