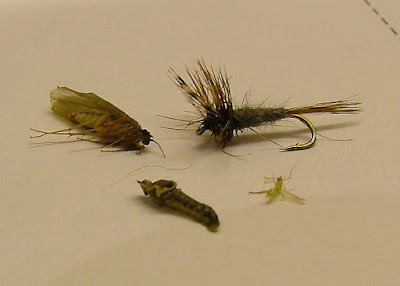 Got in from work tonight and felt like a couple of hours on my favorite strech Ellastone,
Weather was all over the place, rain, thunder, sun I knew before i got there there would be some big hatches going on.
I was not wrong, in fact i have never seen a hatch quite like it, there were all sorts of flys hatching in huge ammounts, olives, sedges, hawthorns and the nightmare canis i thinkAt one point i looked above me to see thousands of spinners hovering above my head..
Well the trout were enjoying the big hatches, they were rising all up the fast rifle up the top end, more rising i have ever seen here,
There was a big problem, i could not tell what they were taking, i went right through my fly box, olives, klinks, ballon caddis, black gnat, grey duster, f flys and my non fail adams!! even changing sizes..
I ended up catching 5 trout and one out season grayling, you might think that is ok but the fish were rising all over the place, some very good size browns, you would of expected to catch every cast by the amount of fish rises...
I was covering most fish with all my flys and they were totally ignoring everthing i put on them, I tried all the methods to get take but still nothing, i then got my head down close to the water and saw thousands of very small white flys hatching which i could only put down as canis,
I think the trout were totally obsessed with these, i have never seen this happen but it was so frustrating, I had nothing in my box to match these flys because they are so small and there were thousands of them, it was like being in a brothel with lots of big titted women and having no money

I dont really know if canis hatch in rivers but i am sure thats what they were, i have posted a pic of the flys that i caught including the Canis ( i think) Can anyone tell me what all these flys are? ( the green nymph one had two wings and legs but fell off in my box). The dry fly is a size 16 adams

Well still enjoyed being out, just a bit frustrated...