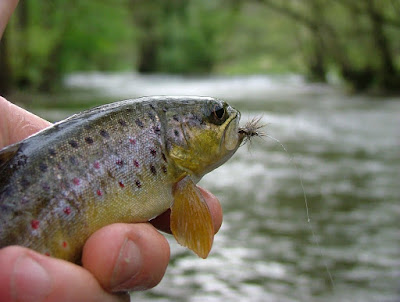 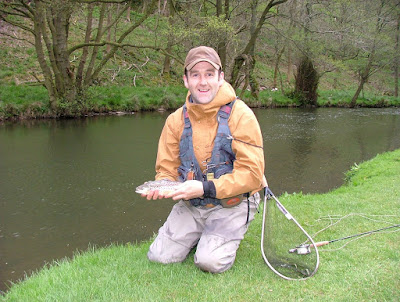 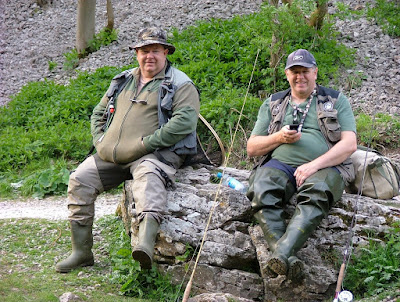 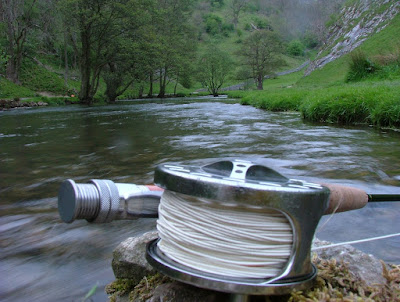 Went to have a go on the impressive Dovedale tonight, i always dreamed of fishing here as a young lad when i used to come with my parents, I remember watching a fly man 100 yards up from the stones and dreaming of fishing there one day, well tonight my dreams came true and i fished in the same spot i saw 25 years ago...
On arriving i made my way from the bridge and worked my way upstream, there was a strong wind pushing down from the stones and i was struggling to cast so made my way up above the stones away from the breeze, I walked past the nursery pool and fished my way upstream from there taking my first trout, a small wildy that came to my dhe, Rises were rare but kept with my dry fly.
On my way up i noticed two fly men approaching, they looked more dodgy than the greeks i had seen on the churnet on friday, i then realised it was the derbyshire brothers Mick and John!!
Was nice to see them so i could get some advice and i was soon in there fly boxes taking there top flys!!
I even got the elusive Larrys Pride!
The lads asked me to have a fish with them as they had been most of the day and took lots of fish to the dry, They took me back down the river showing me the places to find fish, I started to fish the nursery strech with Mick and John sitting on the rock guiding where to place the fly, they seemed to duck on every back cast i made!!
I caught a nice wild fish to a claret klinhammer (Micks)

John decided to fish further down stream so left Mick guiding me, I had the chance to have a go of Micks new split cane rod, this was hard to cast at first then i got used to it and was casting it better than my own, I could feel the end in the butt section which seemed to make the fly land very softly indeed..
Fish were rising now but were very hard to get take a fly, we went through quite a few until i got out the Larrys Pride, Well my night changed instantly and started to take fish after fish, wild and stockies, the trout were hammering this fly and taking it violently hooking themselves,
I had a go at the stones and hooked a top class wild brown nearing a pound, Mick said it was one of the best wilds he had seens in here, we were taking a photo and it jumped clean out of my hands and away.
I worked down from the stones missing loads of fish from me not looking at my fly, Also Mick said i was striking too quick, I have recently snapped my Greys streamflex and currently using a Cortland 4# which is heavy to me and i kept bumping the fish and snapping my tippet sriking..

Mick got off around half eight, we shook hands and i thanked him for a great night, he stayed with me all the way and never bothered to fish himself, give me loads of advice and gave me three of the Larrys Pride!! No fly was doing much until i used his fly, If you see Mick around you will have to hound him for one, a hot fly!
I am after some bigger fish this year so decided to stay until dark, i am told that this is when they come out,
As the light faded the big browns did come out! They were just sipping off the top, The rises were tiny but i could see how big some were, I had a huge fish come to my fly, suck in and blow out very quickly, If i could not see these fish i would think they were tiny as the rises were very small..
At nearly dark i sent my DHE downstream and saw a tiny rise, i waited then hit into a nice fish, it went beserk giving me a right merry dance, i then landed a brown pushing the 2 lb mark.. my biggest rown so far.
I had 9 fish in all and realy enjoyed myself, i would like to thank Mick (Trugg) and John for there help,
I will be back very soon