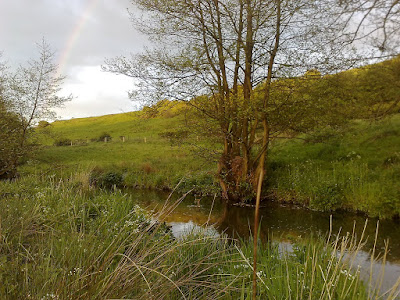 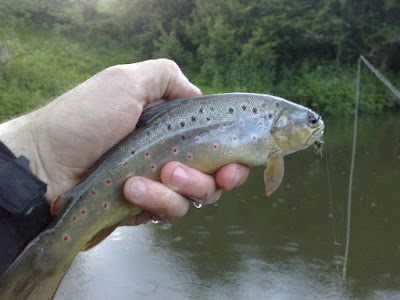 Went to have a look at milldale tonight but looked up and slightly coloured, another day should see it ok,
Headed off for a go on Bentley Brook for my first time, the river was slightly up with only slight colour but well fishable,
This is pure wild trout fishing in a small brook but has lots of fishy runs all the way through, I knew fishing would be hard and stealth is a must here.
Arriving i walked the river to look for rises rather than fishing blind, i saw only three rises in different places so opted to have a go where i had seen fish..
I saw a hatch of the first Mayfly of the season and this was a joy to watch, hiding in the bushes i watched this huge fly drift drift down a lane to see a small wild trout nail it in one swoop, i placed a adams on and drifted it down the same run only to see this fish ignore it, I then found a huge mayfly pattern in my box and drifted it in the same run, the same fish came up and took the fly and i hooked one of these wild fish, i was into the fish for 10 seconds and the hook pulled, these fish fight as hard as i have come across.
I found that the fish were only rising once then would not show again for at least five minutes.
I Persisted with the dry fly and as the light faded i hooked a nice fish on my trusty DHE with a violent take, after a good scrap i landed my first BB trout and what a gorgeous trout it was, around half a pound and the nicest trout i have ever caught, fin perfect and a lovely array of red spots,
These fish are truly wild and are hard to catch but its a great feeling to hook one knowing you have to get it right to get a take on a dry fly, i noticed that if they had a slash at my fly and i missed it, the trout would never rise again and would go down.
Will be back there again when the river comes back to normal..
I only took one fish tonight but it was worth 10 of most fish i catch at other venues..
Will post pictures tommorrow..

Thanks Glen
Posted by glen pointon at Thursday, May 21, 2009