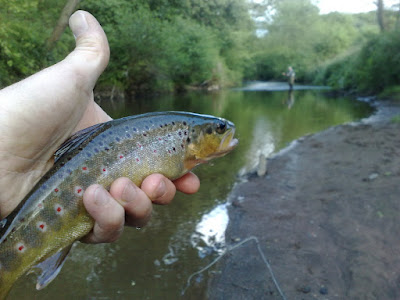 Went to Lords Bridge tonight, in stoke the weather was really windy with a bit of a chill, when i arrived at 7.00 the sun came out and the wind dropped, i think Lords bridge is a cracking stretch if there is a good wind as the valley its in seems to cover most wind,
I was wondering if i would enjoy it after my session on the Wye but as soon as i saw the river and got in i had more a buzz than ever, this part of the churnet is a pleasure to fish, the smells of wild garlic and the overgrown trees make it great..the river churnet has a strong place in my memories, i fished it in froghall bait fishing from 7 years old right up until i started fly fishing.
I think fishing rivers for years has helped me in fly fishing rivers as i can see a good run that will hold fish, something you only get from fishing

I usually prefer the lower end of the Fenton/new leek part, but decided with limited time to have a good crack at the top end, the river was in fine form, i got in just up from the weir and worked my way up, surprisingly there were no fish rising and not much fly life, i think the weather going cooler today had knocked it off, i suppose it would be better nymph fishing but i stuck to my guns and put on a balloon caddis to try and bring them up, this did nothing.. I reached to mid point where the pipes come into the river and spotted rises, i found a small hatch of olives coming off so put on a Adams and took my first fish, a cracking little brownie with top class markings, I then saw Tim Walton who i always seem to bump into around the rivers, he had been fishing the duo down the bottom end and had taken quite alot of fish to the nymph, We decided to fish together through the last part of the river, rises were still slow, Tim switched to the dry only and showed me some of his spots where he has taken fish from, we caught a few fish on the way up and i took a decent brown to wards the top end..
All in all a great night to be out fishing and a pleasure to fish with Tim, thanks mate