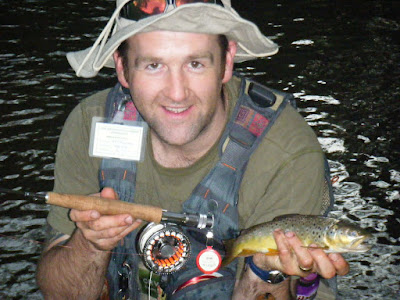 Went to Lords bridge tonight late on, got there around eight, tackled up on the bridge and looked for rises, nothing really happening apart from the strech above..
Walked further down to the middle strech and saw Roger Bryant off the forum, had a quick chat and we decided the wade through together to see the rest of the nights fishing in,
He had been fishing for most of the day and said it had been hard going,and taken around 5/6 fish and been snapped by a good fish, i have noticed that most of our rivers are going through the motions at the min, i put it down to the Mayfly really, dont think the fish know whats going on yet, We must be in for some real good action soon.
We both fished the middle strech and found rises but we could not find a fly that consistantly worked, it drives me mad when i cant find the hatch, but thats what fly fishing is all about, when you find it you feel great..
We found that we were getting more success with smaller drys (20) but only seemed to pick fish up who were just having a smash at a different fly than the hatch?
We both took around 5 fish up the strech and i caught a decent sized beautiful churnet wildy, these fish are the the best looking trout i have seen and knock spots off the Dove browns(sorry for pun)
Had a good laugh with Roger and he shows the same enthusiasm for the game as me, we both swapped good advice, He is joining the Drac soon so will be enjoying some of there cracking rivers.
At the top of the strech we fished between the two cut stumps until dark, Roger says he never stays that late but he will now after he saw the magic 20 min rises before dark, Roger took a nice brown and lost a few, we could only hit a certain run with a downstream drift so it was hard to get a good presentation, We had a very good sized fish rising inbetween a snag, sendind a big ripple when its rose, Roger managed to get it go for his Iron Blue Dun 4 times but i think it was just touching it,
These big fish do really come out late on to feed, but they are still hard to catch..

A really enjoyable night spent with Roger, and will be going out again soon, Roger is posting me a picture he had taken so will will post it on my blog, I had a new hat on tonight that makes me look more of a twat than Alex's Hat on Kevs blog..(sorry Alex)