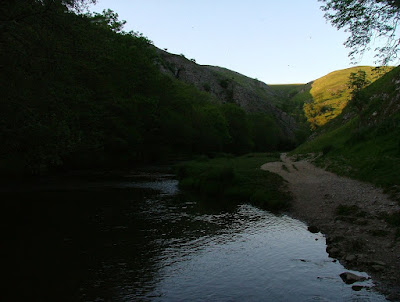 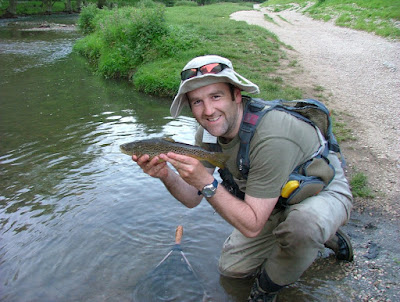 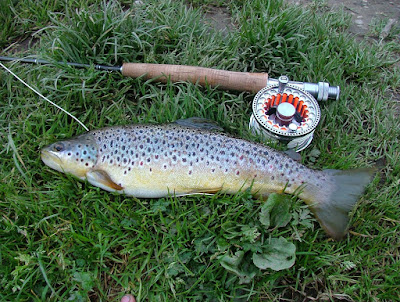 Finished tea tonight with my family and asked the mrs if i could get the last rise in while mayfly is still on, been fishing so much just lately felt a bit guilty but only a bit..
Was heading for Lordsbridge but at last min i decided to go for Dovedale, it only takes me 20 mins to get to dovedale and the same for Lords bridge so both are a nice local river for me.
I arrived at eight but this time of year you can have good sport in a hour or so, tackled up on the car park and walked over the bridge only to see the best rise of olives, and mayfly i have ever seen, it was that big, walkers were running away from the flys swarming!
In the first pool the trout were really going mad, hitting the Mays, it was like every trout there were on the hatch, like a nob i had no mayflys with me so opted for a large DHE.
I took a nice fish on my first cast, then the second and the third, I new i would have to calm down so opted to move on and only cast to the bigger rises in hope of a large fish.
The river was alive with game trout hitting the Mays.
I moved futher up from the bridge and bumped into Gary (Fishcake on the Forum), he had been taking trout all the way up and said he had around 10 fish in a hour or so, he was on his way back but stayed with me for a hour giving me valuable advice on this strech, by this time it had calmed down slightly so we casualy fished a few pools, Gary gave me one of his own tied Mayfly cripples which got me a few more fish, Gary showed me a few different methods of casting styles, one which twiched the line at the end of your cast to give you more slack on the water to get a better prentation where the fly would fish longer than my normal cast, will take me some practise to get it right..
As Gary was walking over the bridge i hooked a really good fish in a deep fast pool which i had seen rising but not got it to take until i put the Fishcake cripple over it.. this fish went nuts and took me on a merry dance, Gary shouted across that my rod looked like it was going to snap!! Gary came back and i landed a lovely wild brown heading for the two pound mark, this fish had my heart racing and one of my best from the Dove yet. There is no feeling better than feeling your rod loop over to a good fish ask it heads deep towards a snag..Gary took a couple of photos and left, i fished up the pools to the stones and took another 4 fish, as the temperature dropped at dark the rises went, the sedges were swarming all over late on, i was made up with my large brown so opted to get off on a good note,
I would like to thanks Gary for spending some time guiding me and also for the 'Fishcake Cripple'